Unlike most geothermal resources, The Geysers is a dry steam field which mainly produces superheated steam. Steam is produced from a greywacke sandstone reservoir located at depth 2.5-4.5 km with temperatures exceeding 400C that is capped by a heterogeneous mix of low permeability rocks and underlaid by a silicic intrusion.

Over the years, field exploitation resulted in a long-term reduction of reservoir steam pressure and a decrease in dry steam production. To recharge the reservoir, fluid injections started at The Geysers in 1990’s including two major treated wastewater injection projects: Southeast Geysers Effluent Pipeline (since 1997) and Santa Rosa Geysers Recharge Project (SRGRP) (since 2003). These injection projects ineavitably led to the increase level of induced seismicity throughout the entire field raising concerns of potential environmental and socio-economic impacts on local communities. The largest earthquake as of 2018 occurred on December 14, 2018, and had magnitude 5.01. 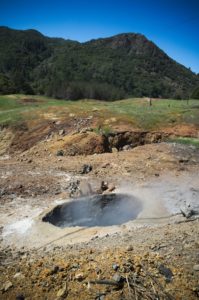 The seismicity has been monitored in the area for more than 20 years creating the most comprehensive induced seismicity dataset. Recorded microearthquakes are associated with water injections and steam extractions2. In recent years, the relative amount of M>4 earthquakes is increasing in comparison with small-scale seismicity that may be related to the changes in the exploitation strategy of the reservoir relying on intensification of treated wastewater fluid injection. Therefore, understanding the interactions between technological parameters and occurrence of LMEs is important for the safe and sustainable energy production at the site.

Extensive seismic monitoring array composed of 31 local seismometers operated by Lawrence Berkeley National Laboratory, a broadband regional network and additional short-period geophones have been deployed throughout the reservoir area to examine the seismic response to steam production and fluid injection. The data are freely available through the Northern California Earthquake Data Center. 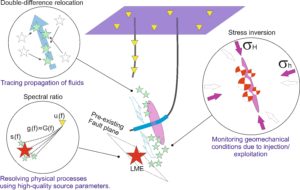 At The Geysers, we mostly focused on analysis of induced seismicity related to fluid injection into the two injection wells: Prati-9 and Prati-29, located in the northwestern part of the field. The seismicity catalog was intensively processed using double-difference relocation, spectral ratio and stress inversion techniques.  Double-difference technique significantly
improves the precision of hypocenters, allowing imaging the fluid path and  propagation in response to multiple injections with unprecedented detail. Spectral ratio technique provides refined source parameters that can later be used to interpret the subtle interactions between pressure perturbations, fluid flow, and fracture re-activation within the reservoir. The stress inversion technique can contribute towards monitoring geomechanical processes occurring in the reservoir in response to short-term injection and long-term production activities.

Studies of The Geysers

The articles are ordered from the newest to the oldest studies. This lists contains contributions where our team members were (co)authors.